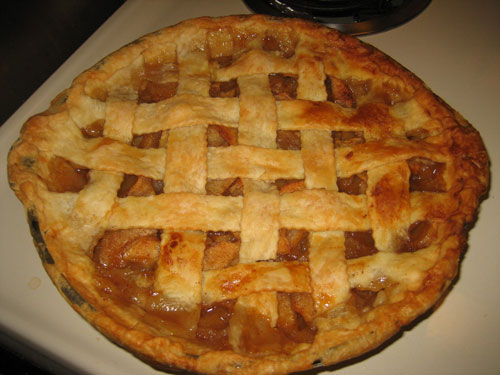 Some Interesting Facts about Apple Pie:

The earliest known recipes for apple pie date back to Medieval times. Apple Pie recipes were brought to America by the early European settlers.

Following are some references to the history of Apple Pie

“The typical American pie made from uncooked apples, fat, sugar, and sweet spices mixed together and baked inside a closed pie shell descends from fifteenth-century English apple pies, which, while not quite the same, are similar enough that the relationship is unmistakable. By the end of the sixteenth century in England, apple pies were being made that are virtually identical to those made in America in the early twenty-first century. Apple pies came to America quite early. There are recipes for apple pie in both manuscript receipts and eighteenth-century English cookery books imported into the colonies.”
—Oxford Encyclopedia of Food and Drink in America, Andrew Smith editor [Oxford University Press:New York] 2004 (p. 43)

“The Romans introduced new economic plants. They had already developed several apple varieties, with fruits smaller than those of today but larger and sweeter than those borne by Britain’s indigenous wild crabs…Their apple varieties included types for good keeping, and villa owers stored them spread out in rows in a dry, well-ventilated loft…Apples were sliced into two or three pieces with a red or bone knife (since metal stained the fruit), and were put to lie in the sun.”(p. 325-6)…”One of the earliest named apples was the pearmain, recorded soon after 1200. The copstard, a very large apple, was popular from the thirteenth to the seventeenth centuries. It was sold in the streets fo London by costermongers…By the fifteenth century pippins, pomewaters, bittersweets and blanderelles had become fashionable apple varieties. Several of the medieval applese were good keeping types; indeed, apples were preferred when they had been kept awhile and allowed to mellow.” (p. 330-1) Apples were pulped in the mortar and then put into tarts.” (p. 334)
—Food and Drink in Britain: From the Stone Age to the 19th Century, C. Anne Wilson [Academy Chicago:Chicago] 1991 (p. 325-6)

“Apple. There were no native American apples when the first settlers arrived on these shores..The first apple seeds were brought by the Pilgrims in 1620, and there were plantings in New Jersey as of 1632…In 1730 the first commercial apple nursery was opened on New York’s Long Island, and by 1741 applese were being shipped to the West Indies. The proliferation of the fruit into the western territories came by the hand of John Chapman, affectionately known as Johnny Appleseed. Born in Leominster, Massachusetts, in 1774, Chapman left his father’s carpentry shop to explore the new territories…Apples were introduced to the Northwest by Captain Aemilius Simmons, who planted seeds at Fort Vancouver in Washington in 1824…”
—The Encyclopedia of American Food and Drink, John F. Mariani [Lebhar-Friedman:New York] 1999

controlled substances [...] What host are you the use of? Can I am getting your associate link for your host? I desire my website loaded up as fast as yours lol[...]

medical conditions [...]you made running a blog glance[...]

prescription-only drug [...] What host are you the use of? Can I am getting your associate link for your host? I desire my website loaded up as fast as yours lol[...]

blood pressure [...]Wow, fantastic weblog structure! How lengthy have you ever been running a blog for?[...]